Marty McFly has been catapulted back to 1950s Hill Valley when an experiment carried out by his oddball scientist friend Doc Brown goes wrong. Now he needs your help to find a way of travelling back to the future to rescue his friend! Build Marty, attach him to his LEGO® Toy Tag and place him on the LEGO Toy Pad to see him come to life in the game. Activate his special Sonar Smash ability to help him solve in-game puzzles and overpower enemies, and when he needs a time-traveling boost, add the rebuildable 3-in-1 DeLorean Time Machine and Hoverboard into the game! 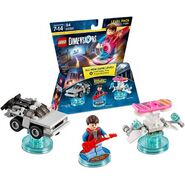 The set in its entirety
Add a photo to this gallery
Retrieved from "https://lego-dimensions.fandom.com/wiki/71201_Level_Pack?oldid=97628"
Community content is available under CC-BY-SA unless otherwise noted.