Build Owen and the ACU and place them on the LEGO® Toy Pad to launch them into the LEGO DIMENSIONS™ multiverse. Use their weapons and activate their powerful special abilities to battle enemies and solve exciting puzzles. When things get tough, send in Owen's Velociraptor and the ACU's Gyrosphere, and then rebuild them for upgraded in-game abilities. 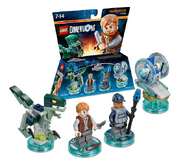 Add a photo to this gallery
Retrieved from "https://lego-dimensions.fandom.com/wiki/71205_Team_Pack?oldid=109642"
Community content is available under CC-BY-SA unless otherwise noted.