Zoinks! The LEGO® worlds have been mashed up into a crazy, topsy-turvy multiverse and someone needs to help figure out what's going on! Build and place Scooby-Doo™ and Shaggy™ on the LEGO Toy Pad and bring them to life in the game. Then activate their special abilities and help them solve the LEGO DIMENSIONS™ mysteries! Call in The Mystery Machine™ and giant Scooby Snack™, and rebuild them for upgraded in-game abilities. 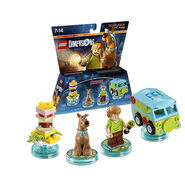