LEGO Dimensions Wiki
Register
Don't have an account?
Sign In
Advertisement
in: Sets, Fun Packs, The Lord of the Rings,
and 6 more

Protect the multiverse with Elven Prince Legolas™ from The Lord of the Rings™! Build Legolas™ and take him on a LEGO® DIMENSIONS™ adventure through a mash-up multiverse of your favorite characters. Place him on the LEGO Toy Pad to transport him into the game, then activate his special Pole Vault, Target and Acrobat abilities to crack puzzles and fend off foes. Use his Arrow Launcher to help him on his journey and rebuild it into a Seeking Shooter and Triple Ballista for upgraded in-game powers! 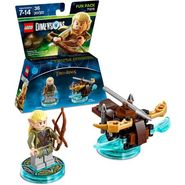 The set in its entirety
Community content is available under CC-BY-SA unless otherwise noted.
Advertisement