LEGO Dimensions Wiki
Register
Don't have an account?
Sign In
Advertisement
in: Sets, Fun Packs, Legends of Chima,
and 7 more

71222 Fun Pack is a Legends of Chima LEGO Dimensions set released in Wave 1 in September 2015.

Ramp up the action with awesome Laval from LEGO® Chima™! Team Laval up with your favorite characters in this crazy mash-up multiverse! Build and place the heroic Lion Prince on the LEGO® Toy Pad to bring him to life in the game, then activate his special CHI, Super Strength, Acrobat, Laser Deflector and Sonar Smash abilities to solve puzzles and defeat enemies. Use his Mighty Lion Rider to bolster his might and rebuild it into a Lion Blazer and Fire Lion for upgraded in-game powers! 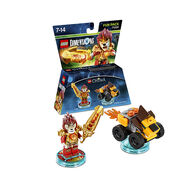