Start a Wiki
71229 Team Pack is a DC Comics LEGO Dimensions set released in Wave 3 in January 2016. It revolves around The Joker and Harley Quinn.

Get devious with The Joker™ and Harley Quinn™ from DC Comics™! Place the mischievous DC Comics™ villains The Joker™ and Harley Quinn™ on the LEGO® Toy Pad to launch them into the LEGO DIMENSIONS™ multiverse. Use their weapons and activate their powerful special abilities to battle enemies and solve exciting puzzles. When things get tough, send in The Joker's Chopper and Harley's Quinn-mobile. Rebuild The Joker's Chopper into a Mischievous Missile Blaster and The Joker's Lock 'n' Laser Jet. Rebuild Harley's Quinn-mobile into a Quinn Ultra Racer and Missile Launcher. Activate The Joker's special Grappler, Target, Hazard and Electricity abilities, and Harley Quinn's Acrobat and Super Strength abilities to solve puzzles and battle enemies. 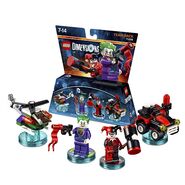 Add a photo to this gallery
Retrieved from "https://lego-dimensions.fandom.com/wiki/71229_Team_Pack?oldid=114194"
Community content is available under CC-BY-SA unless otherwise noted.