Join LEGO® NINJAGO™ Lloyd on a LEGO DIMENSIONS™ mission! Build this famed Ninja, place him on the LEGO® Toy Pad to bring him to life in the game, and add him to an exciting mash-up multiverse of your favorite characters! Use Lloyd's two golden katanas and activate his special Spinjitzu, Illumination, Acrobat, Stealth, Laser Deflector and Stealth abilities to solve puzzles and take on enemies in true ninja style! When it's time to take the battle to the sky, launch Lloyd's Golden Dragon and rebuild it into a Sword Projector Dragon and Mega Flight Dragon for upgraded in-game powers! 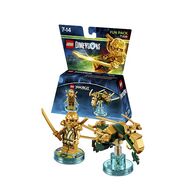