71247 Team Pack is a Harry Potter LEGO Dimensions set released in Wave 6 in Year 2. It revolves around Harry Potter and Lord Voldemort. Released in September 27th, 2016

Bring the Wizarding World to life in the LEGO® DIMENSIONS™ Multiverse with Harry Potter™ and Lord Voldemort™. Build and place the iconic duo on the LEGO Toy Pad and launch them into the Multiverse. Unlock the Harry Potter Adventure World and bring the fight between good and evil into the Battle Arena. Use Harry to cast spells such as Wingardium Leviosa, Stupefy, and Expelliarmus to solve puzzles and fight off Death Eaters, or play as Lord Voldemort for access to Dark magic. When traveling across the Adventure World, jump onto the Hogwarts™ Express or Enchanted Car, and then rebuild the vehicles into the Steam Warrior and Soaring Steam Plane, and the Shark Sub and Monstrous Mouth for special attacks and super weapons. 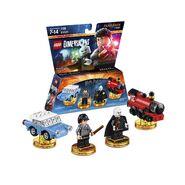