Smash your way through the LEGO® DIMENSIONS™ Multiverse with the classic action hero, B.A. Baracus. Add the A-Team’s mohawk-sporting mechanical genius to the mash-up adventure with your favorite characters! Build and place him on the LEGO® Toy Pad to send him into the game with his Super Strength and Fix-It abilities, or activate his special A-Team™ Master Build and Laser Redirect skills for those harder-to-solve puzzles. Unlock the Adventure World and Battle Arena and use B.A.’s Van to quickly get him where he’s needed most, then rebuild it into the Fool Smasher and, if B.A. can overcome his fear of flying, rebuild the vehicle again into The Pain Plane for upgraded powers in the game! 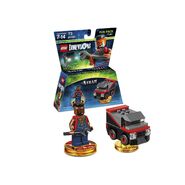 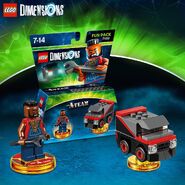 Add a photo to this gallery
Retrieved from "https://lego-dimensions.fandom.com/wiki/71251_Fun_Pack?oldid=77008"
Community content is available under CC-BY-SA unless otherwise noted.