Hey, you guuuys! Help Sloth and Chunk escape the Fratelli hideout and join the rest of the Goonies on their search for One Eyed Willy’s treasure. Make a break from the Fratelli family as they chase you through the pirate ship, but don’t forget to dodge the traps! Build Sloth and use his Super Strength to smash through walls. For extra fun, play as Chunk and use his infamous Truffle Shuffle. Hop on to One-Eyed Willy’s Pirate Ship when you need a ride or play the Skeleton Organ to make your way out of the caves. Rebuild One-Eyed Willy’s Pirate Ship into Fanged Fortune and the Inferno Cannon, and the Skeleton Organ into Skeleton Jukebox and Skele-Turkey for added game play.

*Not included physically but playable upon completing the Goonies level. 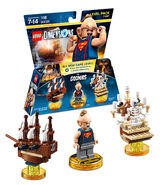 Add a photo to this gallery
Retrieved from "https://lego-dimensions.fandom.com/wiki/71267_Level_Pack?oldid=109577"
Community content is available under CC-BY-SA unless otherwise noted.