Despite officially being considered part of Wave 7.5, which released on February 10, 2017, this Fun Pack released early to certain retailers alongside Wave 7 on November 18, 2016, most notably Toys-R-Us in the United States and Canada as well as Argos in the United Kingdom.

Keep the Adventure Time™ party rocking in the LEGO® DIMENSIONS™ multiverse with Marceline the Vampire Queen! Build and place the Marceline minifigure on the LEGO Toy Pad to send her into the game with her Sonar Smash and Bolt Deflector abilities, using the Marceline Axe Guitar. Activate her Telekinesis and Teleport skills to make your way through the Adventure Time Adventure World and Battle Arena. Build and use Marceline’s Lunatic Amp to make some noise, and rebuild it into the Shadow Scorpion and Heavy Metal Monster when you need even more power. 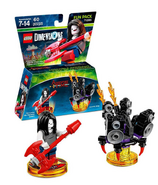 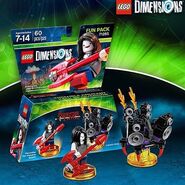