Get ready to save the day with the quirkiest, sassiest and sweetest alien of all! Join Starfire in the LEGO® Dimensions™ multiverse and place this secret weapon on the LEGO Toy Pad. Unleash her powerful green energy blast to kiss the bad guys good-bye in her crime-fighting adventures. With the abilities to interact with LEGO Rainbow bricks and regain health quickly in battle, no one can put Starfire down. Access the Teen Titans Go!™ Adventure World in Jump City and explore several psychedelic areas from the Titans Tower to Wacka Doodles Amusement Park! Dive into the exclusive Battle Arena and take Starfire’s fire green orbs to the test for bigger possibilities against your family and friends. Hop onto the Titan Robot for a roller-coaster fun-filled adventure and then rebuild the Titan Robot into the T-Rocket or Robot Retriever for an even more supercharged adventure with the rest of the Titans gang! Watch the exclusive Teen Titans Go! episode to discover how this vibrant team of teenage superheroes banded together as they stumbled upon the multiverse where they encounter new adventures and friends along the way. 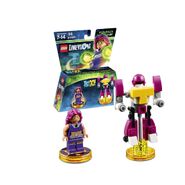 Add a photo to this gallery
Retrieved from "https://lego-dimensions.fandom.com/wiki/71287_Fun_Pack?oldid=114546"
Community content is available under CC-BY-SA unless otherwise noted.