Powerpuff to the rescue! Save the world before bedtime in the LEGO® DIMENSIONS™ multiverse with Buttercup™, the toughest fighter! Build and place this cherished champion of justice on the LEGO Toy Pad and send her into the Multiverse to battle sinister evildoers. Fight crime and come just in time with supercool superpowers like Energy Shield and Flight! Unlock the Battle Arena and use Buttercup’s Super Strength to smash through and explore the exclusive Adventure World. When the going gets tough, jump into the Mega Blast Bot to crush your foes! Rebuild Mega Blast Bot into the Ka-Pow Cannon and Slammin’ Guitar to rock extra-awesome combat abilities. Once again, the day is saved thanks to The Powerpuff Girls™! 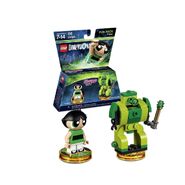