The Adventure Time World is one of the 16 franchises from Year 2 featured in LEGO Dimensions. It was available from the start of Year 2. However not all characters from this franchise were available due to Marceline wasn't available until the release of Wave 7. 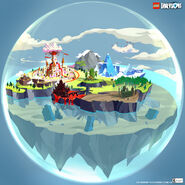 Add a photo to this gallery
Retrieved from "https://lego-dimensions.fandom.com/wiki/Adventure_Time_World?oldid=108025"
Community content is available under CC-BY-SA unless otherwise noted.