Start a Wiki
Agent Smith is one of the non-playable characters in LEGO Dimensions from The LEGO Batman Movie franchise who originated from The Matrix franchise.

Agent Smith began as an Agent, an AI program in the Matrix programmed to keep order within the system by terminating human simulacra which would bring instability to the simulated reality, as well as any rogue programs that no longer serve a purpose to the Machine collective. To this end, Smith and his fellow Agents possess a number of superhuman attributes from their ability to bend the rules of the Matrix. He manifests his physical form by inhabiting and overwriting the simulated body of a human wired into the Matrix; by moving from body to body, he can reform himself if he is "killed" (which only kills the host body) and appear virtually anywhere. He can overcome the limitations of gravity and the human body, giving him speed and strength sufficient to dodge bullets flawlessly, punch through concrete with his bare hands, and jump impossible distances. He and other Agents use their earpieces to communicate with each other instantaneously and perceive the actions of other humans wired into the Matrix via a type of shared consciousness (when Agent Smith removes his earpiece during the first film, he is left unaware of the attack on his building). Smith is armed in the first film with the Desert Eagle, chambered for high-caliber .50 AE ammunition, as is standard with all Agents within the Matrix.

At the end of the first film, he appeared to have been deleted by Neo; however, in the sequels, Smith is revealed to have been linked to Neo, which enabled him to resist being sent to the system source where destroyed programs are permanently deleted. No longer an Agent, Smith is liberated from the Machines' control and exists as a renegade program that manifests himself akin to a self-replicating computer virus compared to his original Agent-based ability to inhabit a single body wired into the Matrix. Smith gains the power to copy his physical form onto any entity in the Matrix by phasing his hand into their body and spreading a black liquid that transforms them into a copy of himself, resulting in an ever-growing army of Smiths connected by a single consciousness. By copying himself onto a human redpill in the process of disconnecting from the Matrix, Smith overwrites their consciousness and exists in the outside world. This is seen when Smith takes over Bane's body in The Matrix Reloaded; however, he is repelled when he attempts to do the same to Morpheus and Neo. Smith's real power comes from his ability to absorb memories and powers from his victims, human and program alike, culminating in him taking over the Oracle and fighting Neo in the final battle of the Matrix series.

During the film after the Joker having been emotionally hurt by Batman's insistence that he was not his archenemy, he is seen depressedly watching a news report of Superman who had recently banished General Zod to the phantom zone which contains some of the evilest villains in pop culture, chief among them was Sauron, Voldemort, Wicked Witch, Daleks, and Agent Smith. It is here when Joker concocts his greatest plan to free the villains from the phantom zone and conquer Gotham. When Joker is sent to the phantom zone he is greeted by the various villains, Sauron is the first to greet him by commenting he is the new guy, all the other villains first impression is to kill him but Joker quickly states that he plans to set them all free if they help him to destroy Batman and rule Gotham city. Smith and his clones along with all the other villains agree with Smith stating that Joker wishes to "smite him" to which Joker gleefully agrees. Smith and his clones act as sort of goons or minions compared to the other villains but regardless put up a nasty fight for the dark knight and the bat family. During the final battle, he and his clones fight Batman and all the dark knight's B-Z list villains but in the end, he is beaten by the heroes and is sent back to the phantom zone. 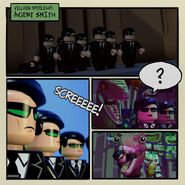 Agent Smith along with his multiple clones. 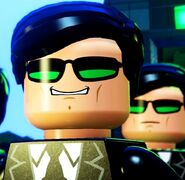 Add a photo to this gallery
Retrieved from "https://lego-dimensions.fandom.com/wiki/Agent_Smith?oldid=112331"
Community content is available under CC-BY-SA unless otherwise noted.