Amy Rose is one of the non-playable characters in LEGO Dimensions, from the Sonic the Hedgehog franchise.

Amy Rose is a young, carefree anthropomorphic hedgehog who has had a crush on Sonic the Hedgehog for years. Originally starting out as just one of Sonic's most devoted young admirers, she would mature into one of his most trusted allies and after proving herself she became a member of Sonic's group who has sworn to protect the world from the evil scientist, Doctor Eggman and his Badnik Horde. Her loyalty to her friends and team is without question and her improving skills have assured her importance to the heroic cause. She is also the leader of the occasionally activated Team Rose.

Amy was first seen being kept captive by Doctor Eggman with the other members of Team Sonic (excluding Sonic). She is later seen at the end of the level hitting Eggman with her Piko Piko Hammer to grab the last Emerald, so Sonic could transform into Super Sonic in order to take down Chaos. After Chaos' defeat, Amy begins to slip out of the now unstable Death Egg, only for Super Sonic to open a rift to save her. 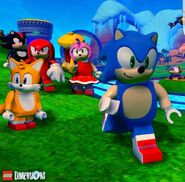 Amy alongside Sonic the Hedgehog and Knuckles the Echidna in the Sonic the Hedgehog World
Add a photo to this gallery
Retrieved from "https://lego-dimensions.fandom.com/wiki/Amy_Rose?oldid=112923"
Community content is available under CC-BY-SA unless otherwise noted.