Start a Wiki
Beetlejuice is one of the many franchises featured in LEGO Dimensions for Year 2. It is based on the 1988 horror comedy film made by Warner Bros.

After Barbara (Geena Davis) and Adam Maitland (Alec Baldwin) die in a car accident, they find themselves stuck haunting their country residence, unable to leave the house. When the unbearable Deetzes (Catherine O'Hara, Jeffrey Jones) and teen daughter Lydia (Winona Ryder) buy the home, the Maitlands attempt to scare them away without success. Their efforts attract Betelgeuse (Michael Keaton), a rambunctious spirit whose "help" quickly becomes dangerous for the Maitlands and innocent Lydia. 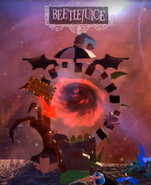 Add a photo to this gallery
Retrieved from "https://lego-dimensions.fandom.com/wiki/Beetlejuice?oldid=114007"
Community content is available under CC-BY-SA unless otherwise noted.