Cave Johnson is a non-playable character in LEGO Dimensions, from the Portal 2 franchise.

Cave Johnson is the founder of the Aperture Science Enrichment Center, which created the Portal Gun and GLaDOS. He is never physically to be seen in Portal 2, but old pictures and paintings of him can be found. Chell later finds out that he was driven insane by constant exposure to moon dust. Before he died, he left his secretary Caroline in charge of Aperture Science.

Cave appears as the Citizen in Peril of this level. He reveals he has transferred his body into a Core. He also reveals he has trapped himself in a room in Old Aperture Science. To rescue him, you must use a character with the Chi Abilty to release him.

During the section of Old Aperture, many of his pre-recorded messages can be heard. 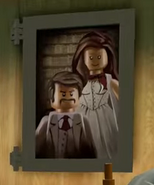 Cave Johnson's Core as a Citizen In Peril in Aperture Science

Cave Johnson core in game
Add a photo to this gallery
Retrieved from "https://lego-dimensions.fandom.com/wiki/Cave_Johnson?oldid=113622"
Community content is available under CC-BY-SA unless otherwise noted.