The Chroma Keystone is an unlockable in-game Keystone when you defeat the Joker in Meltdown at Sector 7-G, in Year 1 of LEGO Dimensions. ,

The symbol comprises of three color circles: red, blue and yellow, which are then arranged as angles of a triangle. Between the circles are lines connects all three circles together.

The Chroma Keystone allows players to coat their characters with three main colors: blue, red and yellow to match the color pattern to solve puzzles. Before players activate the keystone, they need to find all three color pads so that they all connect to the color pattern board. Once activated, players can place their characters on corresponding color sections on their toy-pad. 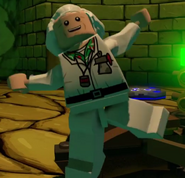 A Blue Chroma Pad can be seen behind Doc Brown in Master Chen's Arena
Community content is available under CC-BY-SA unless otherwise noted.
Advertisement