Dana Barrett is one of the non-playable characters in LEGO Dimensions from the Ghostbusters franchise.

Dana Barrett was the first customer in Ghostbusters. Dana Barrett was a professional musician living in New York. She played cello in "a major symphony orchestra," presumably the New York Philharmonic. She is also Peter Venkman's love interest in the film. It is later revealed that her apartment was designed by Ivo Shandor and the Cult of Gozer in the early 20th Century to attract ghosts, but most importantly, to bring back Gozer to the world, which has her getting possessed by Zuul the Gatekeeper during the initial stages of the arrival of Gozer.

Dana serves as the Citizen in Peril for The Phantom Zone. She is trapped in a room on the Titanic (bonus area). To save her you need to travel to the 1912 Titanic and use a character or vehicle with Grow Ability to grow a plant. When you return to the present the giant plant will have grown and as a result, opened the door. After it opens, Dana walks out, thanking the player. 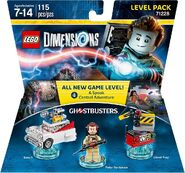 The box art of the Ghostbusters Level Pack. Dana can be seen in the right corner of the box.
Add a photo to this gallery
Retrieved from "https://lego-dimensions.fandom.com/wiki/Dana_Barrett?oldid=112413"
Community content is available under CC-BY-SA unless otherwise noted.