Start a Wiki
Doctor Who is one of the many franchises featured in LEGO Dimensions. It is based on the 1963 science-fiction television series of the same name.

Doctor Who began airing on British television in November 1963, and ran continuously until the show was put on hiatus in 1989. An attempt was made to revive the show with a straight-to-TV movie in 1996, but this did not result in an ongoing series. In 2005 the show was successfully revived due to critical acclaim, and thankfully continues airing around the world to this day. (Unlike other revivals, the 1996 movie and 2005 series are direct continuations of the 1963-89 series, making it all one big series, though for simplicity's sake the BBC tends to treat the "Classic Era" and "Modern Era" separately in some things, like season numbering. 12 of the modern era seasons and 38 overall have aired as of 2020.)

Doctor Who celebrated its 50th anniversary in 2013. A key to its longevity is the plot element that the lead character, The Doctor, regenerates into a new body and personality (which sometimes includes changing gender) when the old one is mortally wounded or gets too old, allowing for the periodic recasting of the role, which is treated by the production team - and by fans - as a soft relaunch and renewal of the series. Since Christmas 2017, the role has been played by Jodie Whittaker. The changing of the Doctor's companion - usually a lone young and female human which shares adventures with the Doctor - has also been treated as a soft reboot. Since October 2018, the Doctor's companions have been three people: an older man, Graham O'Brien, played by Bradley Walsh; a young man, Ryan Sinclair, played by Tosin Cole; and a young woman, Yasmine Khan, played by Mandip Gill.

At the time of the release of LEGO Dimensions and the first two related character packs, the Doctor was played by Peter Capaldi, who appeared in the television series from 2013-17 while Jenna Coleman played his companion, Clara Oswald, who appeared from 2012-15 and in 2017. Along with other cast members, Capaldi and Coleman recorded dialogue for the game and took part in a major promotional event for the game at the 2015 San Diego Comic Con.

There have been several spin-off series produced since 2006; one of these, Torchwood, featured a former companion named Captain Jack Harkness, who appears as a non-playable mission-giving character in the Doctor Who Adventure World.

The Doctor is called a "Time Lord," a time-traveling adventurer from a far-off planet, who travels through time and space in a spacecraft known by the acronym TARDIS (short for Time And Relative Dimension In Space). A TARDIS is a machine that is larger on the inside than the outside and is supposed to change its appearance based on its surroundings; however, the Doctor's TARDIS is locked in the form of a 1960s police box. The Doctor is also able to regenerate upon facing critical injuries, so he appears as many different people throughout the series. The Doctor loves Earth, so he makes many trips here to save the planet, or to enlist earthlings to help him with tasks in the galaxy.

* Indicates a playable character upon completion of a certain level or a drone. 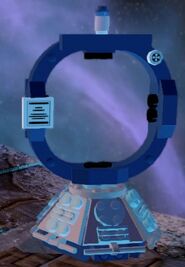 Gateway portal to the Doctor Who World.
Add a photo to this gallery
Retrieved from "https://lego-dimensions.fandom.com/wiki/Doctor_Who?oldid=113917"
Community content is available under CC-BY-SA unless otherwise noted.