Start a Wiki
Frodo is one of the non-playable characters in LEGO Dimensions, from The Lord of the Rings franchise.

Frodo Baggins is a hobbit of the Shire, whose parents drowned in a river and so was adopted by Bilbo Baggins, his uncle. He inherited the One Ring from Bilbo and so underwent a journey to save Middle-earth from evil.

Frodo was one of three characters (the other two being Robin and MetalBeard) taken away through a portal by Lord Vortech, prompting Batman, Gandalf and Wyldstyle to begin travelling through the LEGO Multiverse to find them.

Lord Vortech, upon capturing the three characters, uses Robin, Frodo, and MetalBeard to create The Tri.

Later on, after the heroes freed them, Frodo then helped the heroes and it is assumed that he returned back to his world.

The Lord of the Rings World: Middle-earth (Bag End, Hobbiton, The Shire)

Frodo as seen in the Tri Hard with a Vengeance! achievement 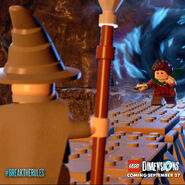 Frodo being sucked into a rift

Frodo alongside MetalBeard and Robin on Foundation Prime
Add a photo to this gallery
Retrieved from "https://lego-dimensions.fandom.com/wiki/Frodo?oldid=112505"
Community content is available under CC-BY-SA unless otherwise noted.