Start a Wiki
The G-6155 Spy Hunter is a Midway Arcade vehicle in LEGO Dimensions. It is the Gamer Kid's personal vehicle, and is included in 71235 Level Pack.

The G-6155 Interceptor first appeared in the 1983 arcade classic Spy Hunter. Throughout the game, the G-6155 Interceptor is upgraded with new weapons when the player drives into weapons vans scattered across the levels of the game. The car also has the ability to transform into other vehicles, one being a boat. Players use the Interceptor and its arsenal to destroy enemy vehicles while minimising civilian causalities.

It appears in the first area of Retro Wreckage, having been corrupted and keeps firing at Gamer Kid, but is reverted to normal after being destroyed and rebuilt. It is then kept by Gamer Kid. 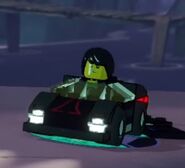 The alternate design of the G-6155 Spy Hunter.
Add a photo to this gallery
Retrieved from "https://lego-dimensions.fandom.com/wiki/G-6155_Spy_Hunter?oldid=98811"
Community content is available under CC-BY-SA unless otherwise noted.