Start a Wiki
Gremlins is one of the many franchises featured in LEGO Dimensions for Year 2. It is based on the popular 1984 horror/comedy film of the same name.

A gadget salesman is looking for a special gift for his son and finds one at a store in Chinatown. The shopkeeper is reluctant to sell him the "mogwai" but sells it to him with the warning to never expose him to bright light, water, or to feed him after midnight. All of this happens within one day after and the result is a gang of gremlins that decide to tear up the town on Christmas Eve.

It has been six years since the Gremlins attacked the town of Kingston Falls one fateful Christmas Eve. Gizmo, the kindhearted friendly Eternal Mogwai from the first film, has recently lost his old owner, Chinese antique shop owner Mr. Wing, and barely survived the demolition of Mr. Wing's shop by Clamp Industries who were denied a permission to hand over his property six weeks prior, only to be captured by intrigued scientists of Splice O' Life. Meanwhile, the previous film's deuteragonist Billy Peltzer and his fiancee Kate Beringer have moved to New York City, working at Clamp Tower as a concept artist and a tour guide respectively. Unbeknownst to them, the lab that captured Gizmo earlier is based in Clamp Tower, until Billy learns from a delivery man about a harmonic singing in the lab, a clue to Gizmo's whereabouts in the Tower. Billy manages to save Gizmo from being experimented on, only for the latter to decide to explore the tower more, which leads to a water accident that involves a broken water fountain forming a new batch of ill-willed Gremlins that soon plan to take over the Big Apple. 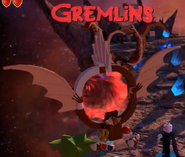 Add a photo to this gallery
Retrieved from "https://lego-dimensions.fandom.com/wiki/Gremlins?oldid=113300"
Community content is available under CC-BY-SA unless otherwise noted.