Start a Wiki
Harry Potter is one of the many franchises featured in LEGO Dimensions for Year 2. It is based on the film series of the same name, which is in turn based on the book series written by J.K. Rowling.

Harry Potter and the Philosopher's Stone

Harry Potter, a boy who learns on his eleventh birthday that he is the orphaned son of two powerful wizards and possesses unique magical powers of his own. He is summoned from his life as an unwanted child to become a student at Hogwarts School of Witchcraft and Wizardry, an English boarding school for wizards. There, he meets several friends who become his closest allies and help him discover the truth about his parents' mysterious deaths.

Harry Potter and the Chamber of Secrets

Harry Potter, Ron Wealsey, and Hermione Granger return to Hogwarts for their second year, which proves to be more challenging than the last. The Chamber of Secrets has been opened, leaving students and ghosts petrified by an unleashed monster. Harry must face up to claims that he is the heir of Salazar Slytherin (founder of the Chamber), learn that he can speak Parseltongue, and also discover the properties of a mysterious diary only to find himself trapped within the Chamber of Secrets itself.

Harry Potter and the Prisoner of Azkaban

Harry Potter's third year sees him, along with his friends, attending Hogwarts School once again. Professor R. J. Lupin joins the staff as Defense Against the Dark Arts teacher, while convicted murderer Sirius Black escapes from Azkaban Prison. The Ministry of Magic entrusts the Dementors of Azkaban to guard Hogwarts from Black. Harry learns more about his past and his connection with the escaped prisoner.

Harry Potter and the Goblet of Fire

During Harry Potter's fourth year, the Dark Mark appears in the sky after a Death Eater attack at the Quidditch World Cup, Hogwarts plays host to a legendary event: the Triwizard Tournament, there is a new Defence Against the Dark Arts, Professor Alastor Moody and frequent nightmares bother Harry all year. Three European schools participate in the tournament, with three 'champions' representing each school in the deadly tasks. The Goblet of Fire chooses Fleur Delacour, Viktor Krum and Cedric Diggory to compete against each other. However, curiously, Harry's name is also produced from the Goblet thus making him a fourth champion, which results in a terrifying encounter with a reborn Lord Voldemort.

Harry Potter and the Order of Phoenix

Harry Potter's fifth year begins with him being attacked by Dementors in Little Whinging. Later, he finds out that the Ministry of Magic is in denial of Lord Voldemort's return. Harry is also beset by disturbing and realistic nightmares, while Professor Umbridge, a representative of Minister for Magic Cornelius Fudge, is the new Defense Against the Dark Arts teacher. Harry becomes aware that Voldemort is after a prophecy which reveals: "neither can live while the other survives". Therefore, the rebellion involving the students of Hogwarts, secret organization Order of the Phoenix, the Ministry of Magic, and the Death Eaters begins.

Harry Potter and the Half-Blood Prince

In Harry Potter's sixth year at Hogwarts, Lord Voldemort and his Death Eaters are increasing their terror upon the Wizarding and Muggle worlds. Headmaster Albus Dumbledore persuades his old friend Horace Slughorn to return to Hogwarts as a professor as there is a vacancy to fill. There is a more important reason, however, for Slughorn's return. While in a Potions lesson, Harry takes possession of a strangely annotated school textbook, inscribed 'This is the property of the Half-Blood Prince'. As romance and hormones lurk within the castle's walls all year, Draco Malfoy struggles to carry out a deed presented to him by Voldemort. Meanwhile, Dumbledore and Harry secretly work together to discover the method on how to destroy the Dark Lord once and for all.

After unexpected events at the end of the previous year, Harry Potter, Ron Weasley, and Hermione Granger are entrusted with a quest to find and destroy Lord Voldemort's secret to immortality – the Horcruxes. It is supposed to be their final year at Hogwarts, but the collapse of the Ministry of Magic and Voldemort's rise to power prevents them from attending. The trio undergo a long adventure with many obstacles in their path including Death Eaters, Snatchers, the mysterious Deathly Hallows and Harry's connection with the Dark Lord's mind becoming ever stronger.

After destroying one Horcrux and discovering the significance of the three Deathly Hallows, Harry Potter, Ron Weasley and Hermione Granger continue to seek the other Horcruxes in an attempt to destroy Lord Voldemort, who has now obtained the Elder Wand. The Dark Lord discovers Harry's hunt for Horcruxes and launches an attack on Hogwarts School, where the trio return for one last stand against the dark forces that threaten to rid the Wizarding World of non-magical heritage to achieve pure-blood dominance. 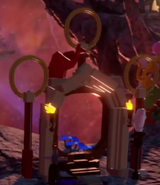 The gateway to the Harry Potter World
Add a photo to this gallery
Retrieved from "https://lego-dimensions.fandom.com/wiki/Harry_Potter_(Franchise)?oldid=113272"
Community content is available under CC-BY-SA unless otherwise noted.