Harry the Hunter is one of the non-playable characters in LEGO Dimensions from the Beetlejuice franchise.

Harry the Hunter is one of the several ghosts who appear in the Netherrealm waiting room. Judging from his physical ghost appearance, he obviously died from having his head shrunken presumably by the Witch Doctor who also died from an unknown cause since he appeared with him in the waiting room. 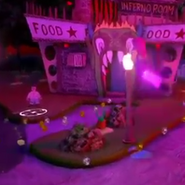 Add a photo to this gallery
Retrieved from "https://lego-dimensions.fandom.com/wiki/Harry_the_Hunter?oldid=112838"
Community content is available under CC-BY-SA unless otherwise noted.