Start a Wiki
The Hogwarts School of Witchcraft and Wizardry is a Harry Potter location featured in LEGO Dimensions.

Hogwarts School of Witchcraft and Wizardry is the Scottish wizarding school, located in the Highlands of Scotland. It takes students from Scotland, England, Ireland, Northern Ireland and Wales. The castle is located in the mountains near a loch. The precise location of the school could never be uncovered because it was rendered Unplottable. To Muggles, the school looks like an old abandoned castle. Similarly, most wizarding schools locations are protected in order to prevent their ways of teaching being revealed, as well as protect the students and schools themselves from any harm.

Established around the 9th or 10th century, Hogwarts is considered to be one of the finest magical institutions in the wizarding world, though other notable schools included Beauxbatons Academy of Magic and the Durmstrang Institute. Children with magical abilities are enrolled at birth, and acceptance is confirmed by owl post at age eleven. However, if the child in question is a Muggle-born, or a magical child born from non-magical folks, a professor from the school would come and inform the child's parents. 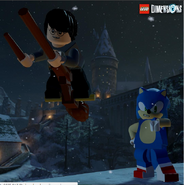 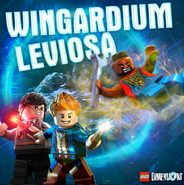 Hermione Granger and Michael Knight inside the Great Hall
Add a photo to this gallery
Retrieved from "https://lego-dimensions.fandom.com/wiki/Hogwarts_School_of_Witchcraft_and_Wizardry?oldid=106865"
Community content is available under CC-BY-SA unless otherwise noted.