Start a Wiki
The Hoverboard is a Back to the Future vehicle in LEGO Dimensions. It is one of Marty McFly's personal vehicles, and is included in the 71201 Level Pack.

A hoverboard is similar in appearance to a skateboard but underwent a hover conversion. They were manufactured in 2015 for all age ranges by different companies. Mattel made pink and orange models with handlebars for young children. Other companies made more aggressive boards, that were used by gangs in some instances, including the No Tech series, the Rising Sun, the Question Mark, and the Pit Bull, a rocket-fired board with three attachments for other riders on similar boards.

Hoverboards worked similarly in principle to skateboards in that they needed momentum by the rider and most would become useless in terrain not suited for them, i.e. water, ice and other low traction surfaces, save for the more powerful Pit Bull model. 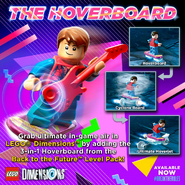 Hoverboard as rode by Beetlejuice in the Wave 9 Promotional

Add a photo to this gallery
Retrieved from "https://lego-dimensions.fandom.com/wiki/Hoverboard?oldid=100510"
Community content is available under CC-BY-SA unless otherwise noted.