Jim Phelps is one of the non-playable characters in LEGO Dimensions from the Mission: Impossible franchise.

Jim Phelps joined the IMF at a young age and quickly rose to the rank of team leader and lead many successful missions throughout his career but after the cold war ended Jim was becoming more and more uncertain of his future in the IMF and was slowly going insane out of delusion and paranoia.

By 1996, Jim Phelps had become disillusioned as he believed he was no longer necessary, despite having served his country for over four decades. By this time, he had married a much younger woman named Claire, and had been given an entirely new team.

Finally snapping, Phelps convinced Claire to go along with his plan to sell sensitive IMF information to an arms dealer, Max, for a large sum of money. He was almost caught, but managed to kill off his team during a Prague mission to stop the theft of a non-official cover (NOC) list of the IMF (which is later revealed to be a mole hunt) and framed rookie team member Ethan Hunt, who looked up to Phelps as a father figure.

For the job, Phelps hired disavowed IMF pilot Franz Krieger to help carry out the murders. In the end, Phelps, Claire, and Krieger successfully killed off three of their teammates as well as their target. During this, Phelps managed to fake his own death by getting shot and falling off a bridge. Phelps then had Claire return to use her charms on Ethan, who had been successfully framed for the murders, as well as being the mole. Ethan concocted a plan to avenge the rest of the team and clear his own name by catching the real mole and stopping him, as well as Max. As the NOC list the team had recovered in Prague was a fake, Hunt decided to steal the real list in order to draw the mole out of hiding. After making a deal with Max in exchange for some money, Ethan hired a couple of disavowed agents for his mission. He chose, computer expert Luther Stickell, while Claire "suggested" Krieger.

After Ethan's plan succeeded, the IMF had his family framed for drug trafficking. After Hunt used a payphone to alert the IMF of where he was (London), Phelps revealed himself to Ethan, claiming he survived getting shot. He then named IMF Director Kittridge as the mole. However, Phelps had underestimated Ethan, who was able to quickly determine that Phelps himself was the mole, and that he hired Krieger to pull off the murders, though he remained unsure if Claire was involved. When Hunt asked why "Kittridge" would do such a thing, Phelps used his own reason: that he had believed he was becoming "a worthless piece of hardware not worth upgrading" due to the end of the Cold War. Hunt returned to the hotel his team is using for a temporary base of operations and, clearly distressed over what he has learned, lets Claire seduce him.

The next day, aboard a high-speed train, Phelps, realized Ethan likely figured him out, hid as he watched Hunt reveal that Claire was in fact in on the treason. By this time, Hunt had given Max the real NOC list and was having Stickell use a jamming device to prevent Max from uploading it. After a tense standoff in one of the rear luggage cars (during which Phelps takes the money from Ethan), Claire revealed she felt guilty about what she had done and tried to prevent Phelps from killing Hunt, causing Phelps to kill her instead. An enraged Ethan then gave chase to Phelps, who was using suction cups to make his way along the top of the train to the end, where Krieger was flying a helicopter to make their escape.

During the fight, Ethan managed to hook the tether of the helicopter to the train, forcing Krieger to pilot the copter into the Channel tunnel. After freeing the tether, Phelps motioned for Krieger to simply pick him up with the bottom of the copter. However, Ethan hopped onto the copter as well, and planted a piece of exploding chewing gum (a relic of the Prague mission) onto the copter, before jumping back onto the train. The gum caused an explosion which killed Krieger, and caused the copter to fall onto Phelps, crushing him. 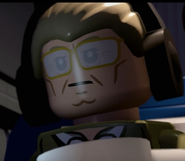 Add a photo to this gallery
Retrieved from "https://lego-dimensions.fandom.com/wiki/Jim_Phelps?oldid=114555"
Community content is available under CC-BY-SA unless otherwise noted.