“I was unaware that my programing allowed me to cross dimensions. How interesting.”

“Hello. I am the voice of Knight Industries Two Thousand's Micro Processor. K.I.T.T. for easy reference, or "KITT" if you prefer.”

“Someone call for a ride?”

K.I.T.T. is a Knight Rider vehicle in LEGO Dimensions. It is Michael Knight's personal vehicle, and is included in 71286 Fun Pack.

KITT (Knight Industries Two Thousand) was physically embodied as a modified 1982 Pontiac Trans Am with numerous special features such as Turbo Boost (which allowed quick bursts of speed or jumping over obstacles), the ability to drive himself, a front mounted scanner bar that (among other things) allowed KITT to "see", and "molecular bonded shell" body armor, portrayed to be invulnerable to diamond headed drills, small arms fire, the impact of thrown objects, and even high speed impact with cinder block wall. The armor could also resist close explosive blasts although a direct hit could cause severe damage. A refit in the 1985 season included the addition of "Super Pursuit Mode" and a convertible top.

“Hello again, Michael. I trust your day has been as strange as the one I'm having.”

— K.I.T.T. when he sees Michael Knight

“Michael, my scanners read your vitals as being very low. I advise caution. ”

— K.I.T.T. reacting to Michael's low health after he hops inside

“Hello, Batman. Did you decide to trade up?... I'm kidding. The Batmobile and I are old friends.”

“Hello, Sonic. Did you hear that your friend 'Shadow' tried to buy me? I suppose, I must be his type of vehicle.”

— K.I.T.T. when he sees Sonic the Hedgehog

— K.I.T.T when he sees Harley Quinn

“Thank you, Mister Baracus. You obviously have impeccable taste.”

“Hello, Stripe. You're not going to start pressing buttons on my dashboard randomly, are you?... This could be bad.”

“A Cyberman? All that technology and no wheels? Seems like a waste to me.”

— K.I.T.T. when seeing the Cyberman

“If you will not be needing me, I'll take my leave.”

“Time to hit the road. Or at least drive down it safely, obeying all traffic laws.”

“I better be going. If I stay here too long, someone might give me a parking ticket.”

“According to my scanners, the next Dimension is just up ahead. Let's hope for a smooth landing.”

“Travelling through dimensions like this isn't exactly covered by my warranty...”

“Hello, Chell. You seem nervous. Have you had some bad experiences with A.I. recently?”

“Excuse me, Miss Wicked Witch. Why are there no traffic signals on the Yellow Brick Road? It seems dangerous.”

“Doctor Brown, you say we don't *need* roads where we're going but I, for one, would much prefer to have them.”

“I'm sorry, Benny. I know I have a lot of blinking lights but that really doesn't make me a spaceship.” 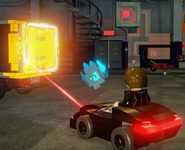