Start a Wiki
Legends of Chima is one of the many franchises featured in LEGO Dimensions. It is based on the animated LEGO TV series of the same name.

After thousands of years filled with peace, Chima is once again torn in conflict because a misunderstanding, and the Crocodile Tribe leads it's allies into battle against the Lions. Soon, Laval the Lion Prince is tricked into throwing the Crocodile's CHI into the "Gorge of Eternal Depth" and more tension comes. Finally after months of fighting, the tribes must unite because of a "Black Cloud" threatening Mount Cavora, the source of CHI, yet when the CHI Falls stop, the Lions are blamed and the final battle for Chima has come. Though, when Laval and Cragger's showdown comes they find themselves falling to their deaths, until Laval sacrifices his life, reminding Cragger of his friendship with him. By faking his death, Laval finds the Crocodile Legend Beast one of the eight Legend Beasts which can restart the falls, and returns much to Cragger's relief. Soon after the Tribes unite as allies to go and save the other Legend Beasts who are trapped in the Outlands. There they find shelter in Lavertus (the exiled Lion's) base and are able to free seven, until it is revealed that the CHI Laval threw was what created this new enemy that had trapped the Legend Beasts, the final Beast is saved and the Heroes barely escape, if not for Lavertus who uses his Golden CHI to support the exit and sacrifices his life. Finally, the Falls are restarted and Chima is flourishing, that is until Scorm the Scorpion King accidentally awakens Sir Fangar an accent enemy, that was frozen for a millennia...

With plenty of CHI the Tribes are joyful, except for Laval's friend Eris who has dreams about a Phoenix Tribe who are masters of Fire. While at home, Cragger finds his swamp under attack by the reawakened Ice Tribes, and hardly escapes with his sister Crooler (who had secretly been the real reason for war in Chima in the first place). The Tribes try to fight back, but find themselves defenceless against the forces of Ice, until Eris convinces Laval and Cragger to go inside Mount Cavora, because of her dream, much to their unbelief they meet Fluminox and discover the Phoenix, who have Fire CHI, the secret to the Ice Tribes' defeat, now the battle is on and the fate of an eternal Ice Age is in the 8 Heroes' hands.They manage to hold the Hunters back for a while, until the Hunters trapped the Phoenixes and blocked the ways to the Fire Chi, so they were able to spread in hole Chima. When the Phoenixes were freed, the 8 heroes started searching for the 8 Fire Harnesses, artifacts for performing the Great Illumination, an ancient ceremony that could cure the Hunters and make them good again. Also, the Hunters released the Ice Bears,the most powerful tribe in Chima, but they were defeated by the normal Bears.After the 8 heroes found the Harnesses, they flew into Mount Cavora and performed the Illumination, transforming Flinx into the Ultimate Phoenix and curing the Hunters. The Phoenixes then left Chima and all of Chima's problems were solved. 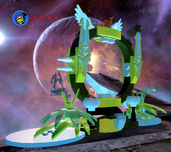 Gateway to the Legends of Chima World
Add a photo to this gallery
Retrieved from "https://lego-dimensions.fandom.com/wiki/Legends_of_Chima?oldid=114176"
Community content is available under CC-BY-SA unless otherwise noted.