MO Co. is a dilapidated, pre-war factory located in the Bad Lands. MO Co. was founded by Moe over a thousand years ago, likely before the Mushroom War. The facility first appears in "Be More," where it is revealed that the facility was the source of all the MOs in the Land of Ooo.

The factory is located in the deserts of the Bad Lands and, on the surface, consists of several refinery-like cylindrical buildings. Many of them have pipes and antennas protruding from their surfaces.

Underneath the desert, the facility mainly consists of extensive tunnel systems and rooms containing old equipment that was once used to produce MOs. In the deepest area of the facility, Moe lives with his creations in a tubular city, an area that is cleaner and better maintained than the rest of the facility. 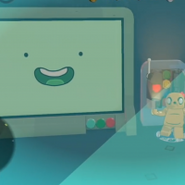 Add a photo to this gallery
Retrieved from "https://lego-dimensions.fandom.com/wiki/MO_Co?oldid=103218"
Community content is available under CC-BY-SA unless otherwise noted.