Miss Argentina is one of the non-playable characters in LEGO Dimensions from the Beetlejuice franchise.

Miss Argentina is a ghost who works as the receptionist in the Netherrealm. She appeared to have died from committing suicide by cutting her wrists. This resulted in her having to work as a bureaucrat since that's what happens to any ghost that have died from suicide. 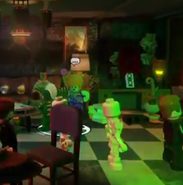 Add a photo to this gallery
Retrieved from "https://lego-dimensions.fandom.com/wiki/Miss_Argentina?oldid=111567"
Community content is available under CC-BY-SA unless otherwise noted.