Ms. Keane is one of the non-playable characters in LEGO Dimensions from The Powerpuff Girls franchise.

Ms. Keane is the kindergarten teacher of Pokey Oaks Elementary. She wears an orange shirt, red vest, brown pants, and has short black hair and light blue eyes. She is patient, understanding and very protective of her students, making her a well-liked, motherly figure. She also owns an orange cat named Valentino.

Although Ms. Keane is a kindergarten teacher, she is also incredibly smart. This was shown in the episode Speed Demon when she, prior to the girls' time travel, actually tried to figure out how the speed of a person throwing an apple could make said apple travel faster than the speed of light and thus being able to travel through time and space. Soon realizing that she is confusing the children, she returns to her normal state and excuses herself.

Ms. Keane also forbids any fighting in school even if there's a crisis taking place within it thus she convinces the girls that there are other ways to solve problems other than fighting as demonstrated in the episode Schoolhouse Rocked. In the episode Imaginary Fiend, a new student came to Pokey Oaks Kindergarten named Mike. The girls find the new kid very strangely when Mike talks to himself, but he was actually talking to his imaginary friend. At a part of the episode, Ms. Keane and her students all believed that Mike's imaginary friend was in everyone's imagination. The girls tried to fight him by using their own imagination.

In the episode Keen for Keane, the girls set up Ms. Keane and Professor Utonium on a date for Valentine's Day, resulting in the two temporarily becoming an item. They called it off after a fight due to Professor Utonium not liking cats. 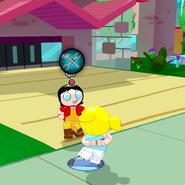 Ms. Keane in front of her house. 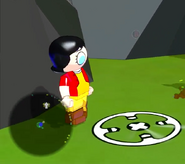 Add a photo to this gallery

Retrieved from "https://lego-dimensions.fandom.com/wiki/Ms._Keane?oldid=113599"
Community content is available under CC-BY-SA unless otherwise noted.