Oliphants are one of the non-playable characters in LEGO Dimensions from The Lord of the Rings franchise.

Oliphants, also known as Mûmakil, are giant elephants that come from the far land of Harad. They are normally docile but can be tamed and trained to be war elephants and made to carry battle towers on their backs.

The Eye of Sauron, under the orders of Lord Vortech, gives Two-Face an Oliphant to use that has been modified with technological armor and weapons, which clearly upsetted Gandalf. Both were summoned to Metropolis via a rift to combat the heroes after they got past the barrier. In addition to the weapons on its side, it also tosses cars at the players. After the machinery was broken off and Two-Face was defeated, the Oliphant was freed and it went through the gate behind it.

Another pair were in Lord Vortech's fortress along with him, the DC Comics villains, and several Flying Monkeys and Daleks when a cubed Sauron returned there. 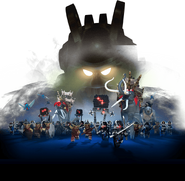 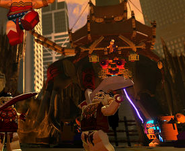 Add a photo to this gallery
Retrieved from "https://lego-dimensions.fandom.com/wiki/Oliphant?oldid=112835"
Community content is available under CC-BY-SA unless otherwise noted.