Start a Wiki
The Land of Oz is a Wizard of Oz location featured in LEGO Dimensions. It is the land of focus in the Wizard of Oz books and the 1939 live-action film.

Oz is a far-off country ‘behind the moon and beyond the rain’ created by American writer L. Frank Baum, the creator and writer of the Wizard of Oz books, also known as the Royal Historian of Oz. This country is the setting of many adventures of Dorothy Gale and her many companions which include her dog Toto, and her first Oz friends Scarecrow, Tin Woodman, and Cowardly Lion. Its capital is the Emerald City which can be accessed through the Yellow Brick Road.

Anything can happen in Oz: the scent of poppies are so dangerous that it can send a person to sleep, inanimate objects like Scarecrow and the Porcelain Dolls can talk, walk and act like humans, water is lethal on Wicked Witches (like the Wicked Witch of the West). It is the home to many magical and alien races like Witches, Munchkins, Porcelain Dolls of China Country, Nomes, Fighting Trees, Mer-people, and many others.

Please note that this section will mainly focus on Dorothy’s first adventure in Oz (mainly based on the 1939 film), not on the other stories that follow after.

Arrival at Oz and First Adventures

However, the celebrations briefly ended when the Wicked Witch showed up to see what happened to her sister and confronted Dorothy. Glinda then mentions the Ruby (Silver in the book) Slippers that her sister used to wear, and the Witch decides to claim them, only for the shoes to disappear from her sister’s feet and reappear on Dorothy’s feet. This later caused the Witch to decide to bring more harm on Dorothy and Toto at any cause before disappearing. Upon hearing Dorothy wishing to go back to her home in Kansas, Glinda tells her to talk to the Wonderful Wizard of Oz who can grant her wish, and she will have to reach the Emerald City via the Yellow Brick Road before disappearing. So Dorothy’s first adventure in Oz commences from Munchkin Town.

Later on, she then befriends Scarecrow, Tin Woodman and Cowardly Lion along the way and they accompany her to Emerald City as well, so they can have their wishes (brains for Scarecrow, a heart for Tin Man, and courage for Lion) be granted too. But when they’re nearing the city, the Wicked Witch casts a field of sleep-inducing poppies on their path, causing Dorothy, Toto and Lion to fall asleep, making Tin Man and Scarecrow cry for help. This is later responded by Glinda sending snow on the field, neutralizing the effects of the poppies on Dorothy, Toto, and Lion.

Dorothy and her friends finally arrived in Emerald City, hoping to grant an audience with the Wizard of Oz. After a brief misunderstanding with a doorkeeper, they go into the city to freshen up. Soon, however, the Wicked Witch sends a warning message to the people to surrender Dorothy to her or else. After the mass hysteria among the citizens of Emerald City, Dorothy and Toto, Scarecrow, Tin Woodman, and Cowardly Lion go inside the Throne Room of the Wizard together (separately in the book). The Wizard soon meets up with them and said that he will grant their wishes if they will bring the Witch’s broom as proof that they defeated her.

At the Witch’s Castle

The group then goes to the Haunted Forest to find the Wicked Witch's Castle. But before they can go inside, the Wicked Witch then sends an army of Flying Monkeys to attack the group and kidnap Dorothy and Toto who’re held hostage by the Witch herself. There, the Wicked Witch attempts to take the Ruby Slippers off from Dorothy, only to realize that she has to kill Dorothy to claim her dead sister’s shoes.

While Dorothy is trapped in the Witch’s room, Toto manages to escape to find Scarecrow, Tin Woodman and Lion to set up a rescue mission for Dorothy. They barely manage to enter the Witch’s Castle in disguise of Winkie Guards and knock out the door of where Dorothy was locked in, freeing her in the process. Soon, they try to escape the castle when the Witch spots them and chases after them with the Winkie Guards. Just as she has they surrounded, she then attempts to put Scarecrow on fire, but Dorothy inadvertently throws a bucket of water to put out the fire, only for her to unknowingly kill her; since the Witch fears water, she soon melts away, hence freeing the Flying Monkeys and Winkie Guards from the Witch’s control over them and the group claiming the Witch’s broom for the Wizard. 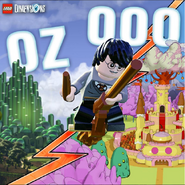 Add a photo to this gallery
Retrieved from "https://lego-dimensions.fandom.com/wiki/Oz?oldid=113759"
Community content is available under CC-BY-SA unless otherwise noted.