The PPG Hotline is a Powerpuff Girls gadget in LEGO Dimensions. It is a rebuild of the PPG Smartphone and is Blossom's personal gadget, and is included in the 71346 Team Pack.

It is usually shown with a happy face and a red blinking nose. However, in some circumstances the PPG Hotline has changed in appearance such as in the episode Tough Love when HIM turned the people of Townsville's love for the girls into hate it showed an angry face and in the episode Abracadaver when a zombie magician was attacking Townsville it had an uneasy expression.

Blossom next to the PPG Hotline. 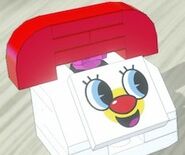 The Hotline
Add a photo to this gallery
Retrieved from "https://lego-dimensions.fandom.com/wiki/PPG_Hotline?oldid=113840"
Community content is available under CC-BY-SA unless otherwise noted.