Princess Morbucks is one of the non-playable characters in LEGO Dimensions from The Powerpuff Girls franchise.

Princess Morbucks is a spoiled, rich, and bratty little girl, who speaks with a lisp and whose partially unseen and mostly mute father allows her to finance various evil plots to destroy the Powerpuff Girls. She also attends Pokey Oaks Elementary, which is the same kindergarten that the Powerpuff Girls attend. Her supervillain outfit consists of a yellow, Powerpuff-style dress, black gloves and boots, and a tiara.

In the episode Stuck Up, Up, and Away she is told by Buttercup that she cannot "just buy superpowers", and she retorts, "Tell that to Batman!" Her hatred of the girls stems from her rebuffed attempt to become one of them. Every time she somehow manages to obtain superpowers, the girls manage to defeat her (although often by no means easily), and Princess Morbucks loses her superpowers and must start all over again.

Despite her well-defined goal of destroying the Powerpuff Girls and frequent collaboration with the series's other villains, some fans and critics do not consider Princess Morbucks to be an actual villain. These people point out that Princess Morbucks' quest to gain superpowers is a coming of age sign, which represents a young girl's desire to be similar to the most popular girls around.

Her father is "Daddy" Morbucks, a large, rotund man whose face and head are always hidden from the viewer. He dotes on his daughter and usually indulges in her whim, but it is hinted that his patience is limited and Princess Morbucks fears truly angering him. Thanks to him, Princess Morbucks has access to virtually unlimited financial resources. 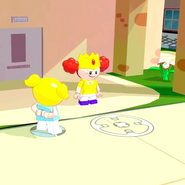 Princess Morbucks in front of Pokey Oaks Elementary, with Bubbles beside her.
Add a photo to this gallery

Retrieved from "https://lego-dimensions.fandom.com/wiki/Princess_Morbucks?oldid=114062"
Community content is available under CC-BY-SA unless otherwise noted.