Robin is one of the non-playable characters in LEGO Dimensions, from the DC Comics franchise.

Timothy Jackson "Tim" Drake witnessed the death of Dick Grayson's parents when a circus act with the latter and his parents went wrong. When a nine-year-old, Drake stumbled upon Batman and Robin fighting the Penguin, and he recognised Robin as Grayson when he saw him perform a complex acrobatic move he performed at the circus. He deduced Batman's identity as his adoptive father, Bruce Wayne, and began watching them from afar.

Following the death of Jason Todd--the second person to take the mantel of Robin--Drake approached Grayson, now Nightwing, and tried to convince him to become Robin again. He refused but took him to Batman so that he could become Robin. Batman wasn't happy with the idea of training Drake, but Nightwing and Alfred Pennyworth convinced him.

After assisting in the defeat of the Scarecrow, Batman finally deemed Drake as ready to fulfill his role as the third person to take the mantle of Robin.

Robin is depicted as having rivalries with villains such as the Penguin and Two-Face (according to Standing Small and LEGO Magazine, respectively). Also, he is often working with the Spoiler.

He would later become a member and the leader of the Teen Titans.

Robin was one of three characters (the other two being Frodo Baggins and MetalBeard) taken away through a vortex by Lord Vortech, prompting Batman, Gandalf, and Wyldstyle to begin travelling through the LEGO Multiverse to find them.

He and Batman were chasing after Bane in Gotham City, when the latter shot green shards of Kryptonite at the Dynamic Duo and Robin got a sample, asking Batman why Bane would need a ton of Kryptonite in the first place. As they were about to cross the bridge, Robin's Red Bird Cycle went out of control, alarming Batman and sucking Robin into a mysterious blue portal. Later, he was held prisoner by Lord Vortech together with a couple of characters, like Frodo and MetalBeard.

Lord Vortech then uses Robin, Frodo, and MetalBeard to create the Tri. 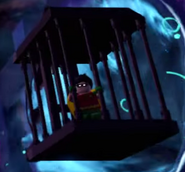 Robin alongside MetalBeard and Frodo Baggins on Foundation Prime
Add a photo to this gallery
Retrieved from "https://lego-dimensions.fandom.com/wiki/Robin?oldid=114010"
Community content is available under CC-BY-SA unless otherwise noted.