“I serve no-one, Gandalf Stormcrow! All serve me!”

Sauron is a non-playable antagonist in LEGO Dimensions from The Lord of the Rings franchise.

Before his appearance in the books and films, Sauron was once a lieutenant to a greater Dark Lord, Melkor, renamed Morgoth, who was ultimately destroyed in the First Age, ending his rule in the North. Sauron, however, hid in the shadows unseen and discovered Mordor, to which he took advantage of its natural surroundings and chose it as his realm. He began to summon an army of Orcs through gruesome breeding and made alliances with the Easterlings, the Variags, the Corsairs of Umbar and the Haradrim.

During the Second Age, Sauron was seen as a threat, for he wanted to conquer all of Middle Earth so he could rule all life in it. So he forged the One Ring, using it to corrupt the other ring bearers, despite the Elves had hidden their rings and the Dwarves' rings were destroyed. The only people he managed to corrupt were the nine kings of men who wore rings, and they became the Ringwraiths. Because his previous plan failed, he gathered his dark forces and slowly began to conquer Middle-earth. But a Last Alliance of Elves and Men lead by Isildur, Elendil and Elrond attacked on the slopes of Mordor and slowly began to win the battle. But Sauron saw its victory and knew he had no choice but to fight them himself. He came out from the Dark Tower and killed many of the soldiers in the battle. He then attacked Elendil, killing him. His son, Isildur, picked up his father's broken sword, Narsil, and cuts off Sauron's finger with the One Ring on it. Sauron explodes and he loses his physical form. Isildur took the Ring, and Elrond told him to destroy it, but he refused. Later he was killed by Sauron's Orcs, to which he lost the ring in the Anduin river for 2,461 years.

The ring is later found by Deagol while fishing. Smeagol was with him and, since it was his birthday, he demanded the ring. When Deagol refused, Smeagol strangled him to death. The ring corrupted and deformed Smeagol, transforming him into Gollum, named after the horrible swallowing noise he made with his throat. In The Hobbit, he becomes the sorcerer, the Necromancer of Dol Guldur, and resummons the Ringwraiths, but the White Council and the Elves drove him out.

During the Lord of the Rings (near the late Third Age), he returns to Mordor, where he declares himself alive and rebuilds his massive army. He adopts the Eye of Sauron, a lidless and enflamed pupil, as his official insignia, which terrifies the people of Middle-earth. However, Bilbo Baggins's nephew, Frodo, gets the ring and takes it into Mount Doom, to which he throws in after a struggle with Gollum, thus destroying Sauron forever.

During the film after the Joker having been emotionally hurt by Batman's insistence that he was not his archenemy, he is seen depressedly watching a news report of Superman who had recently banished General Zod to the phantom zone which contains some of the evilest villains in pop culture, chief among them was Sauron, Voldemort, Wicked Witch, Daleks, Agent Smith. It is here when Joker concocts his greatest plan to free the villains from the phantom zone and conquer Gotham. When Joker is sent to the phantom zone he is greeted by the various villains, Sauron is the first to greet him by commenting he is the new guy, all the other villains first impression is to kill him but Joker quickly states that he plans to set them all free if they help him to destroy Batman and rule Gotham city. Sauron along with all the others accepts the offer and asks if the Joker wants the rivers of Gotham city to run red with his blood but Joker says he doesn't want to go that far and Sauron quickly suggest lava instead to which Joker gleefully agrees. Sauron is one of the first to be released by Harley Quinn and the first thing he does is flood Gotham with lava, during the invasion Joker asks Sauron where the batcave is and Sauron discovers it to be beneath Wayne manor but Joker fails to see that Bruce Wayne and Batman are one and the same. Regardless the villains attack the batcave and Sauron acts as the surveillance for the villains he soon spots Batman and the bat family in Arkham Asylum and orders the minions to capture them. The heroes decide that they cannot get to Wayne manor to stop the Joker with Sauron watching them and so the heroes make a plan to take Sauron out, using master build they create the batwing and manage to get the attention of the Krakken who fires an energy blast at the batwing but he misses and hits Sauron instead, making him the only villain to die in the film. The other villains are horrified by this and the Joker cries out "SAURON!!!!" in anguish as he mourns his dead friend, while the Kraken who is equally shocked by what he did, quietly slips away stating "nothing to see here."

He was sent in to terrorize and invade Metropolis with Two-Face by Lord Vortech. Through the Eye of Sauron, he sends Orcs to attack the city and gives Two-Face an Oliphant to ride on. He is also one of the level's final bosses together with the aforementioned Two-Face and the Eye of Sauron. He also took one of the Keystones (Locate) needed to stabilize the LEGO Gateway. He uses the keystone during his battle with the trio by summoning a Dalek saucer and a small army of Daleks to back him up but he is soon defeated and was seen in his mangled body, sent back to Foundation Prime, which, Lord Vortech then made fun of him. He is seen still in his mangled form later in the story possibly Lord Vortech did not restore him as punishment for his failure in Metropolis.

The Lord of the Rings: Middle-Earth (Mordor)

Sauron's helmet as seen in an achievement icon. 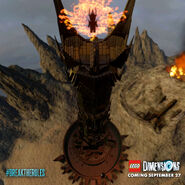 Sauron and the Eye of Sauron
Add a photo to this gallery
Retrieved from "https://lego-dimensions.fandom.com/wiki/Sauron?oldid=113667"
Community content is available under CC-BY-SA unless otherwise noted.