The Speed Star is Sonic's primary vehicle which first appeared in Sonic & Sega All-Stars Racing, then, its sequel, Sonic & All-Stars Racing Transformed. According to the game's website, it was built by Tails with parts left over by an attempted invasion by Doctor Eggman. 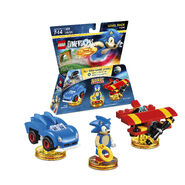 Add a photo to this gallery
Retrieved from "https://lego-dimensions.fandom.com/wiki/Sonic_Speedster?oldid=114666"
Community content is available under CC-BY-SA unless otherwise noted.