The Swooping Evil is a Fantastic Beasts and Where to Find Them character in LEGO Dimensions. It is Tina Goldstein's personal vehicle and is included in 71257 Fun Pack.

The Swooping Evil is a blue-and-green winged magical creature. Its appearance looks like a cross between a reptile and an extremely large butterfly. When it is not flying with its spiked wings, the Swooping Evil shrinks into a green spiny cocoon. It can be quite dangerous, as it can feed on people's brains, but also demonstrated being able to deflect at least some spells by flying into their path. It also secretes venom that, when properly diluted, can be used to erase bad memories.

Fantastic Beasts and Where to Find Them

Newt Scamander brought one to New York in his suitcase in 1926, using it to escape from MACUSA with Tina Goldstein and shield them from Aurors that attacked them. It also was used to wrap restraints around Gellert Grindelwald, while he was in the form of Percival Graves. 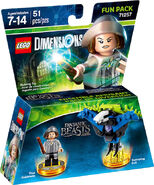 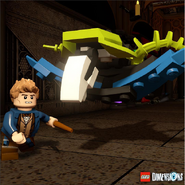 Add a photo to this gallery
Retrieved from "https://lego-dimensions.fandom.com/wiki/Swooping_Evil_(Object)?oldid=110649"
Community content is available under CC-BY-SA unless otherwise noted.