Start a Wiki
Teen Titans Go! is one of the many franchises featured in LEGO Dimensions for Year 2. It is based on the comedy-oriented spinoff of the 2003 Teen Titans ​animated series, which is in turn based on the superhero team of the same name from DC Comics.

The Teen Titans are a team of crime-fighting teenaged heroes residing in Jump City. The team consists of leader Robin, Cyborg, a man with robotic limbs, Raven, a mysterious girl with supernatural powers, Beast Boy, a prankster who can shapeshift into any animal, and Starfire, an alien girl trying to understand Earth culture. Their misadventures involve many problematic scenarios, whether it be competitions to see who the best Titan is, or improving their living conditions at Titans Tower.

*Indicates a character playable in-game by using the Character Selection wheel and a drone unlocked by a character or a vehicle.

The Teen Titans Go! Portal on The Shard before the update 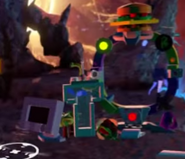 The Teen Titans Go! Portal on The Shard after the update
Add a photo to this gallery
Retrieved from "https://lego-dimensions.fandom.com/wiki/Teen_Titans_Go!?oldid=113883"
Community content is available under CC-BY-SA unless otherwise noted.