LEGO Dimensions Wiki
Register
Don't have an account?
Sign In
Advertisement
in: Franchises, The A-Team, Year 2 Franchises,
and 8 more

The A-Team is one of the many franchises featured in many LEGO Dimensions for Year 2. It is based on the 1983 TV series of the same name.

The A-Team was created by writers and producers Stephen J. Cannell and Frank Lupo at the behest of Brandon Tartikoff, NBC's Entertainment president. Cannell was fired from ABC in the early 1980s, after failing to produce a hit show for the network, and was hired by NBC; his first project was The A-Team. Brandon Tartikoff pitched the series to Cannell as a combination of The Dirty Dozen, Mission: Impossible, The Magnificent Seven, Mad Max and Hill Street Blues, with "Mr. T driving the car".

The A-Team was not generally expected to become a hit, although Stephen J. Cannell has said that George Peppard suggested it would be a huge hit "before we ever turned on a camera". The show became very popular; the first regular episode, which aired after Super Bowl XVII on January 30, 1983, reached 26.4% of the television audience, placing fourth in the top 10 Nielsen-rated shows.

The show remains prominent in popular culture for its cartoonish, over-the-top violence (in which people were seldom seriously hurt), formulaic episodes, its characters' ability to form weaponry and vehicles out of old parts, and its distinctive theme tune. The show boosted the career of Mr. T, who portrayed the character of B.A. Baracus, around whom the show was initially conceived. Some of the show's catchphrases, such as "I love it when a plan comes together", "Hannibal's on the jazz", and "I ain't gettin' on no plane!" have also made their way onto T-shirts and several other types of merchandise.

A quartet of former US militants who were wrongly convicted of a crime forcing them to flee to Los Angeles where they used their military training to fight injustice as The A Team. But John "Hannibal" Smith, Templeton "Faceman" Peck, B.A. Baracus and H.M. "Howling Mad" Murdock always stop to help the little guy against some corrupt local bigwig before escaping the MPs once again.

* Indicates a character only playable after finishing the Lights, Camera... Aquamaniac! quest. 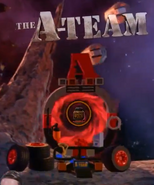 The gateway to The A-Team World.
Community content is available under CC-BY-SA unless otherwise noted.
Advertisement