The Dimensions Crisis is a special Teen Titans Go! episode featured in LEGO Dimensions. It can be unlocked by purchasing either the 71255 Team Pack or the 71287 Fun Pack. The packs unlock a television station near the Teen Titans Go! World portal on the Shard, which can be used to play the episode in-game.

After finishing their LEGO replica of Jump City, Beast Boy and Cyborg celebrate, with Robin complimenting them on how nice the model is. Then, Raven and Starfire enter the room with Raven asking what the building bricks are. Starfire asks Raven if she played with the building bricks as a child, to which Raven replies that her dad was more into destroying universes rather than construction. Beast Boy then suggests that Raven should enter a building contest being held tomorrow with them, however, they run out of bricks. Raven then tells them she has an idea on how they can get some more bricks, and then summons a portal which sucks all of the Titans into a different dimension made entirely out of LEGO bricks. Upon their arrival, alarms begin to ring and they soon discover that Jump City is being attacked by massive groups of Gremlins. The Powerpuff Girls arrive at the city and defeat the Gremlins. They then tell the Titans that Mojo Jojo released Gremlins into Townsville and that some of them managed to escape using a dimensional gateway. Bubbles then asks the Titans if they will help them in rounding up all of the Gremlins, to which Cyborg interrupts them and asks if the rifts can take them into movies from the 1980's.

Blossom then tells the Titans that the rift can take them to a lot of different worlds and that they should help get rid of the Gremlins, however, Raven begins to state that it would be cool to meet Betelgeuse, and persists to say his name 3 times causing a green portal to appear in the sky which summons Betelgeuse. Raven gets ecstatic due to her meeting Betelgeuse, and the Titans then tell him who they are and that they are superheroes. He mumbles under his breath that they could get in his way. He then asks them who wants to have some inter-dimensional fun and has the Titans begin to run off to the dimensional gateway, leaving the Powerpuff Girls behind in Jump City. Each of the Titans travel to different dimensions; Starfire goes to The Wizard of Oz World and dances while following the Yellow Brick Road with Dorothy Gale, Tin Woodman, Scarecrow and Cowardly Lion. Cyborg hangs with the Goonies whilst on the Inferno. Robin beats up criminals in The LEGO Batman Movie World and looks up to see Batman, Batgirl, and The LEGO Batman Movie Robin angry at him.

Robin looks at the ruined Batmobile and admits that he is not good at driving it in this dimension. Batman then slams his fist into his palm, scaring Robin and encouraging him to run. Beast Boy is in the Fantastic Beasts and Where to Find Them World inside of Newt Scamander's briefcase building a fence around an Erumpent, which escapes causing Beast Boy to run off. Finally, Raven and Betelgeuse are walking through a prison, where Betelgeuse encourages Raven to use her magic to make her build. Back in Emerald City, Starfire sings "Oh the Joy", and then proclaims that she wants to dance. She then flies into the air and dramatically creates disco balls out of thin air. Afterward, a citizen claims that Starfire is a witch, and Dorothy and her friends grab buckets of water and splash her. Starfire then flies away indignantly, exclaiming "what a world!". At the Goon Docks Beach, the ending of The Goonies plays out, with Cyborg yelling that they did it, and boosts midair, burning a hole in the Inferno, causing water to spray from it. The Goonies then watch in horror as the Inferno sinks. Cyborg then nervously exclaims that it was his bad. Back in the Gremlin-rid Jump City, Robin jumps out of the vortex and asks what happened.

Cyborg tells him that the Goonies are mad at him, Starfire says that Oz thinks she is evil, and Beast Boy proclaims that his building skills need a little improvement. Robin then asks what happened to Raven when the same rift Betelguese fell from sends down a giant gargoyle. From behind, Raven comes and asks the rest of the Titans if they liked it, to which Robin asks how she built it. Betelgeuse comes out of nowhere and informs them that her magic probably helped. Raven reminds him that he said he wouldn't tell, to which Betelgeuse replies that it's a shame he knows a thing or two about magic, not to mention a little mischievous irony. He then laughs maniacally and flies into the gargoyle. Raven remembers him tricking her into building a giant, evil gargoyle and should've seen this coming. Raven apologizes to the Titans, which Robin says can wait for later. Together, they then attack Betelgeuse, only to be overpowered in the process.

However, Cyborg tells them an idea that they can build something to fight against the gargoyle, which Robin agrees is great. Cyborg then builds Beast Boy's T-Car and rides it, in which the gargoyle breaks it and grabs Robin and Cyborg, who shouts to Beast Boy that he has to rebuild the car, however, he responds that he doesn't know how to and that Cyborg is the better builder, to which Cyborg tells him to just do it. Beast Boy then goes towards the pieces, only to be interrupted by Starfire and her Titan Robot, which charges towards the gargoyle. Beast Boy creates the T-Forklift in hopes of it helping, only to be yelled at and judged by Robin. Cyborg tells Beast Boy to ignore Robin and continue trying. He then rebuilds the T-Forklift into the T-Plane and swoops down at the gargoyle. Starfire's Titan Robot blasts the gargoyle, knocking Cyborg and Robin out of its hands. Beast Boy swoops down and catches them in the T-Plane, which then gets knocked out of the air by the gargoyle. The Teen Titans gather together, and Raven summons her Spellbook of Azarath, which she uses to summon a spell to destroy the gargoyle, which prompts Betelgeuse to laugh maniacally and ride away on a bike. Afterward, the Teen Titans sit on the couch in the non-LEGO Titans Tower. Cyborg, upset that he and Beast Boy lost the building contest, starts to blame Beast Boy for building the model in an "unflattering portrait of the judge". Raven then reveals to them that she changed their model and cheated in order to win. Infuriated, Beast Boy and Cyborg hug each other and start to cry. Raven then smiles and says that she regrets nothing. 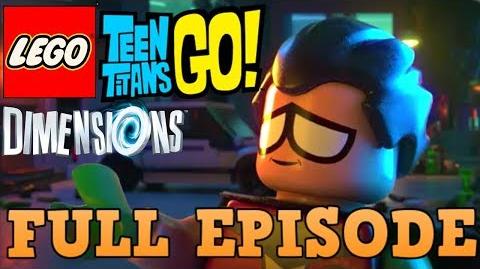 Retrieved from "https://lego-dimensions.fandom.com/wiki/The_Dimensions_Crisis?oldid=112511"
Community content is available under CC-BY-SA unless otherwise noted.