Start a Wiki
The Goonies is one of the many franchises featured in LEGO Dimensions for Year 2. It is based on the 1985 cult-classic adventure comedy film with the same name.

When brothers Mikey and Brand's house faces foreclosure, they and their friends (together known as "The Goonies") find a mysterious treasure map in Mikey's attic, apparently leading to One-Eyed Willy’s Pirate Ship. The Goonies set off on an adventure to find the treasure and save the Goon Docks while evading the criminal crime family known as the Fratellis, except with the help of Sloth, a brother to the Fratellis with a very distorted face, but with inhuman strength.

*Not included physically, but playable in-game upon completing the Goonies level. 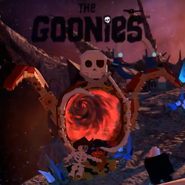 Add a photo to this gallery
Retrieved from "https://lego-dimensions.fandom.com/wiki/The_Goonies?oldid=113283"
Community content is available under CC-BY-SA unless otherwise noted.