The Tornado is a vintage style biplane used by Sonic and Tails to travel long distances. The plane is owned by Sonic but he allows Tails to pilot the plane while he stands on the top wing. The plane is armed with machine guns and homing lasers for defence purposes and has been frequently used in combat against numerous Eggman airships. 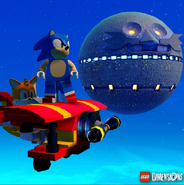 Add a photo to this gallery
Retrieved from "https://lego-dimensions.fandom.com/wiki/The_Tornado?oldid=104968"
Community content is available under CC-BY-SA unless otherwise noted.