The Ultra Time Machine is a Back to the Future vehicle in LEGO Dimensions. It is an alternate build of the DeLorean Time Machine, and is included in 71201 Level Pack.

After going to the year 2015, Doc Brown made a hover conversion, an application that enable vehicles to fly, to his DeLorean. The vehicle was also equipped with a Mr. Fusion, that allows it to work with garbage instead of plutonium as the power source of the DeLorean time travel and flight capabilities. 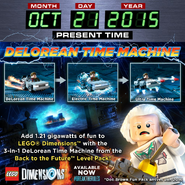 Add a photo to this gallery
Retrieved from "https://lego-dimensions.fandom.com/wiki/Ultra_Time_Machine?oldid=114648"
Community content is available under CC-BY-SA unless otherwise noted.