The Velociraptor is a Jurassic World vehicle in LEGO Dimensions. It is Owen Grady's personal vehicle, and is included in the 71205 Team Pack.

Velociraptors were used for either attraction at Jurassic World or protection, whether to defend the humans or attack enemies. 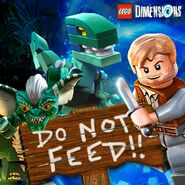 Add a photo to this gallery
Retrieved from "https://lego-dimensions.fandom.com/wiki/Velociraptor_(Object)?oldid=113984"
Community content is available under CC-BY-SA unless otherwise noted.