The Weeping Angels are non-playable antagonists in LEGO Dimensions from the Doctor Who franchise.

These are mysterious unknown creatures from Doctor Who. Weeping Angels are quantum locked - if you stare at them, they cannot move, but even blinking allows them to move with incredible speeds.

The Weeping angels appear first on the cemetery of Trenzalore watching the heroes. Later they are seen in the damaged Cyber Factory and it appears that it is now under their control. After the lights begin to fail, the Angels start chasing the group through the factory. After some time, the group is cornered by four Angels, but thanks to Batman's quick thinking they escape through a trap door, leaving the Angels trapped looking at each other forever.

The Dalek Extermination of Earth

When The Doctor visits Trenzalore, he encounters many Weeping Angels on his way through the cemetery to the overgrown TARDIS. Although the Angels follow him and prevent him from flying his TARDIS, they pose no real threat to him. 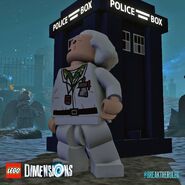 A Weeping Angel found behind the TARDIS and Doc Brown.